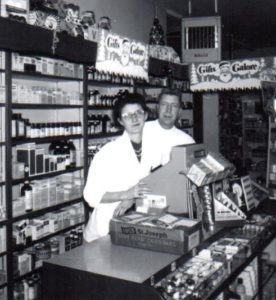 Elizabeth Ruth (Stadler) Wallace – AKA Aunt Bette – was born on April 23, 1924 in Taylor Creek, Montana. She spent her childhood in Washington State, graduating from Edmonds High School in 1942. Between 1942 and 1949, she worked as a civilian employee for the United States Army in Seattle, Alaska and Tokyo.

Elizabeth returned to the States where she met Bryan Walker Wallace and married him in 1950.  Bryan was a board-certified pharmacist, and in 1954, the couple opened their store, Bryan’s Drug, on El Monte in Mountain View and another one in Morgan Hill. The Mountain View pharmacy was in operation until they sold it in 1974, and Bryan continued to work as a part-time pharmacist at Los Altos Pharmacy until he retired.

Shortly before her husband’s passing in 1989, Elizabeth began a career as a travel agent, owning and managing several local travel agencies. This late-life career allowed her to travel the world until her retirement in the late 1990s. She passed away on December 4, 2016 at her home on Marich Way in Mountain View. 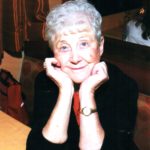 “My aunt was quite a character,” says her niece Cheri Ryan.  “She loved adventures and traveling, and was lucky that she and my uncle invested in local real estate during their marriage. This allowed her to have the care she needed during her later years and live in her home until her passing. We feel it is very important that other seniors be afforded the same opportunities. Her estate has allowed us to make this donation to benefit the local senior community in her memory.”